Undergrads in the Lab: Finding New Opportunities in Research 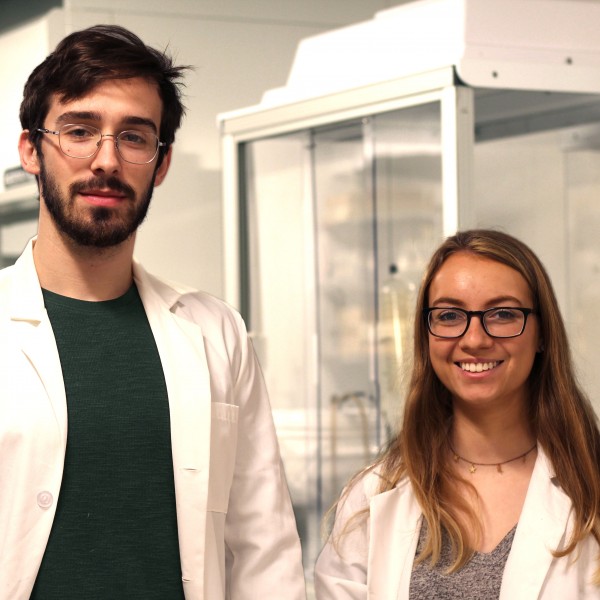 If you are a student taking a molecular genetics course, it is important that you understand the viral life cycle. Fortunately for Ross Bockbrader, he understood it like the palm of his hand thanks to the HIV research he conducted at the College of Pharmacy.

Before graduating with a Bachelor of Science in Pharmaceutical Sciences (BSPS) degree in December 2019, Bockbrader spent much of his last year in the program making small molecules for HIV therapy in Dr. James Fuchs’ lab.

“We would make molecules and have them tested, get the data back and determine how to change the molecule to either make it more potent or more easily metabolized—or make it move around the body differently,” Bockbrader said. “Ultimately, the data would say what works best.” 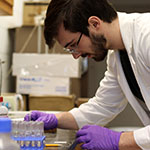 Bockbrader is one of a growing number of BSPS students at the college participating in a research lab. Students have the opportunity to conduct research as early as their first year in the program, but it is up to them to forge a relationship with a faculty member who has an opening for undergraduates in their lab, and to fit time in the lab around their class schedule.

Bockbrader studied organic chemistry at a community college in his home state of New Jersey before transferring to Ohio State, where his grandfather graduated nearly a half century earlier. The chemistry courses he took at Ohio State solidified his interest in synthetic drug chemistry, which pointed him toward the college.

“I originally wanted to be a pharmacist but I realized that working in a pharmacy was not something I wanted to do,” Bockbrader said. “I realized that I wasn’t as interested in therapeutics as I was the science behind it.”

He spent some of his early undergraduate years in a chemistry lab before he approached Dr. Fuchs, whose research with natural products and drug discovery he found inspiring. He set up a meeting and joined Dr. Fuchs’ research team.

Bockbrader wasn’t the only undergraduate student in Dr. Fuchs’ lab. Galina Rozenberg spent her first year as a BSPS student learning about different careers that the program might set her up for, and realized that her interest in research was the way to go. 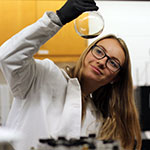 "I wanted to conduct research since I was in high school. I really liked learning about chemistry and doing lab work, so decided I wanted to pursue it as a career,” said Rozenberg, a third-year student in the BSPS drug discovery and development pathway program.

She joined a lab in the College of Medicine’s Department of Physiology and Cell Biology studying cardiac arrhythmias during her sophomore year and stayed there for about a year until she joined Dr. Fuchs’ lab in the fall of 2019.

“Working in these labs isn’t always easy and can often take up a lot of time, so it’s important to stay on top of your work,” Rozenberg said. “In my experience, the work almost always pays off in some way, but it is important to put the time and effort into something you feel is worth doing.”

Given the success with current students conducting research, the college is ramping up efforts to get more undergraduate students into research labs, including hosting its first Student Research Fair in spring 2020.

“We are actively integrating research formally into the BSPS program,” said Christopher Coss, PhD, assistant professor of Pharmaceutics and Pharmacology at COP, who, like Dr. Fuchs, has seen the benefits of undergraduate student involvement in research and has been a proponent of bringing BSPS students into his lab.

“These research experiences provide valuable opportunities to apply what is learned in coursework and increased access to faculty who are, in many cases, world-renowned experts in their field,” Dr. Coss said. “Several students flourish during these opportunities and seek subsequent research training in graduate programs as a next step toward a promising biomedical research career.”

Dr. Coss, who runs a research lab with COP professor Mitch Phelps, PhD, said that there are multiple efforts underway at the college to expand the research opportunities available to BSPS students.