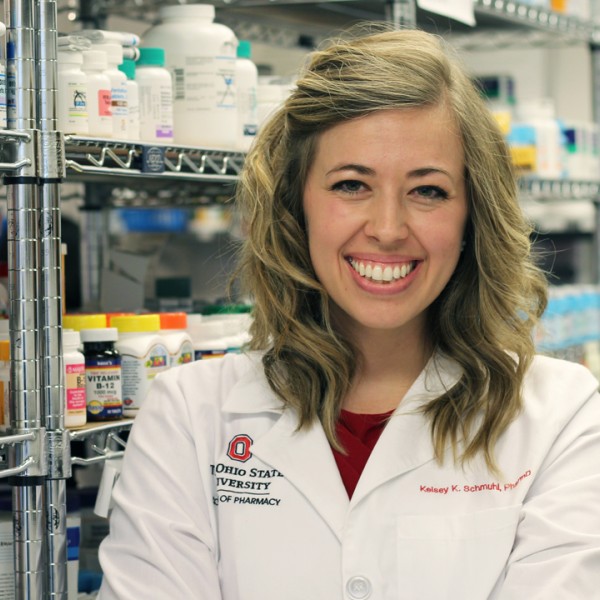 Kelsey Schmuhl, BSPS ’12, PharmD ’17, says learning about the opioid epidemic as an undergraduate student solidified her career choice as a pharmacist.

“I remember the day so clearly. I was sitting in Dr. Ken Hale’s Introduction to Pharmacy course as an undergraduate student. He started talking about the opioid epidemic and told the class that more Ohioans died from accidental overdose than in car accidents every day. I let that sink in for a moment, then stayed after class to find out how I could get involved. I knew right then that I wanted to be a pharmacist and that I wanted to help this cause,” Schmuhl said.

She did just that.

As an undergraduate student at Ohio State, Schmuhl became actively involved in Generation Rx. She taught her hometown community about the open source Generation Rx tool kits which teach about medication safety and she went to conferences on the topic to advertise the Generation Rx initiative.

At one Generation Rx conference, Schmuhl met Karen Perry, the conference’s keynote speaker and a founder of the Narcotics Overdose Prevention and Education (NOPE) Task Force. One of the ways that the NOPE Task Force drew attention to the opioid crisis was through candlelight vigils across Florida.

Schmuhl thought that this would be scalable to the university and a great way for her to get the word out about addiction in Columbus. So, with a team of friends, Kelsey organized the first NOPE candlelight vigil at Mirror Lake on Ohio State’s campus in 2012. The vigil is now an annual event organized by the Generation Rx Collaborative student organization.

In addition to bringing the candlelight vigil to Ohio State, Schmuhl was the only student that testified in support for Ohio House Bill 4 to the Ohio Health and Aging Committee in February 2015. In her testimony, Schmuhl explained the powerful role of a pharmacist, especially student pharmacists, play on health teams. She also explained how student pharmacists had the training necessary to be able to dispense Naloxone.

“Students’ voices are powerful, and legislators listen to students who are passionate about their profession,” Schmuhl said.

Schmuhl credits the plethora of positive mentors in the College of Pharmacy as part of the reason she has been so successful in her career, especially Dr. Ken Hale, clinical professor of pharmacy practice and science, for his consistent guidance throughout her education.

“I have had the blessing of knowing thousands of students in my time at the college. We are so blessed to have the best and the brightest in our various academic programs, and they simply do amazing things. Kelsey is emblematic of that great tradition. She works hard, she gives so much, and she cares deeply. It’s a crucible for positive change, and she has made a difference at every level of her training and practice,” said Dr. Hale.

“Don’t ever think that as a student you don’t have the power or capability to make an impact, because you do. And if you don’t do it, no one else will,” Schmuhl said.

In 2017, Schmuhl graduated from the college’s PharmD program. At the hooding ceremony, Schmuhl received the Faculty Award, the highest honor for a graduating PharmD student. Schmuhl is a great example of a student finding their passion and turning it into action. She hopes other students will follow her lead.

“If I were to give advice to students who wanted to get involved, I would tell them to say yes to opportunities when they come up and don’t be afraid to seek out opportunities outside of the College of Pharmacy. There are so many opportunities in Columbus at the campus level, at the community level and the state level. Don’t be afraid to step out of your comfort zone and say yes,” Schmuhl said.