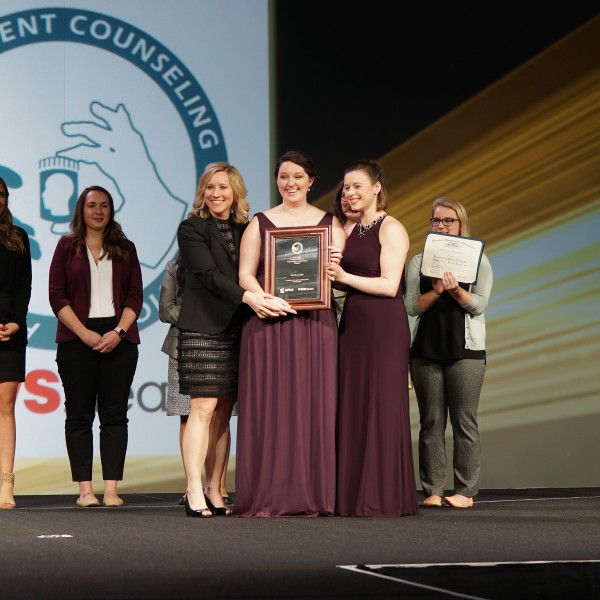 Sarah Wheeler, a fourth year Doctor of Pharmacy (PharmD) candidate at The Ohio State University College of Pharmacy and permanent resident of Winchester, Virginia, recently won the American Pharmacist Association – Academy of Student Pharmacists (APhA-ASP) National Patient Counseling Competition. Wheeler out-counseled more than 130 students across the country at the organization’s annual meeting in Nashville, TN and received a cash prize with her award. Wheeler is the second Ohio State student in five years to receive the national award.

The APhA-ASP National Patient Counseling Competition tests student pharmacists’ patient counseling skills. The competition is designed to reflect changes that are occurring in practice, to promote and encourage further professional development of the student pharmacist, and to reinforce the role of the pharmacist as a health care provider and educator.

Wheeler participated in the competition over the past three years, viewing it as a good opportunity to practice her skills.

“I’ve been competing at the local level since my second year in the PharmD program. (The competition) is a good checkpoint to see how I am progressing. Watching my video from this year, and reflecting on my skills from the first year I participated, it is incredible to see how far I’ve come and how much I’ve learned,” Wheeler said.

At the preliminary round, students select a simple practice scenario at random and are required to counsel a patient within five minutes on the appropriate use of the drug involved. Evaluations are based on the content and style of the counseling presentations. The ten highest scoring participants are then invited to the final round.

The final round involves a more complex counseling situation where the participants again select a prescription at random and are asked to counsel the patient on safe and effective drug use. In addition, the patient in the final round will display personality characteristics such as anxiousness, belligerence or apathy to challenge the participants' ability to convey pertinent information in a realistic situation.

“Sarah is a shining example of the student leaders in our college,” said Henry J. Mann, dean and professor of the College of Pharmacy. “She has capitalized on the vast opportunities available to our students, improved her skills and became the top patient counselor in the country among her peers.”

During Wheeler’s final round, she was tasked with explaining an EpiPen to a father who was afraid of needles and whose son was recently diagnosed with a peanut allergy.

“During the final round, we still only had five minutes to counsel the patient, and this time I had to teach them how to use a drug-device,” Wheeler said. “I was very familiar with the EpiPen because we trained with it in practice lab at the college. I also was responsible for training patients on using an EpiPen during my APPE rotations at the emergency departments I was in.”

In addition to her classes and APPE rotations through the college, Wheeler also credits working at the College of Pharmacy’s Medication Management Program (MMP) with her knowledge of patient counseling.