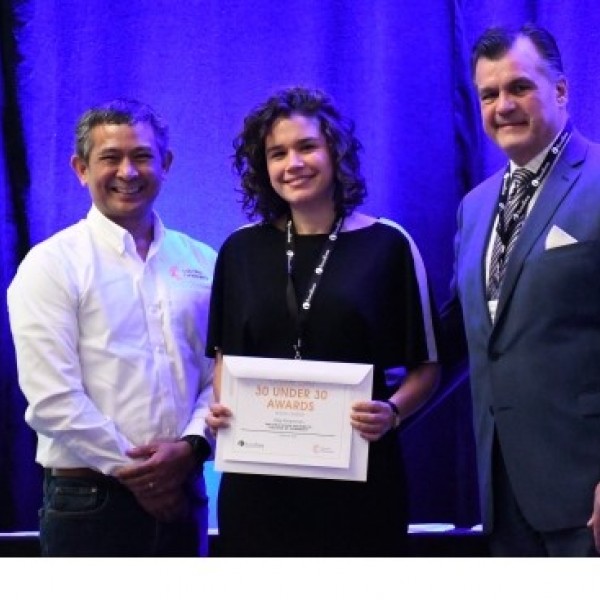 Ezgi Karaesmen, a fifth-year PhD student in the College of Pharmacy’s Division of Pharmaceutics and Pharmacology, was recognized as one of the 30 most influential individuals in Columbus tech under the age of 30.

Karaesmen received the 30 Under 30 Award last month at ComSpark, an innovation and technology summit in Columbus, for her efforts promoting statistical programming education for people working in data analytics and research fields.

Since she transferred to The Ohio State University in 2016, Karaesmen has conducted several workshops to help people from various backgrounds acquire skills in R, a programming language for statistical computing and graphics.

“In the era of big data, many businesses, researchers and students are struggling with data processing and analysis in an efficient and reproducible way,” Karaesmen said. “I try my best to teach the most useful tools for data processing, visualization and report generation R has to offer. One of my main goals for the workshop is for attendees to get a good sense of what a clean dataset looks like and what steps they need to take in order to get their real-world data to look like that.”

In addition to workshops, Karaesmen organizes R-Ladies Columbus, a monthly meetup group that aims to promote gender diversity in the R community and addresses R-related topics.

“With R-Ladies, we aim to encourage women to code and provide a platform to speak about their programming knowledge. This allows women to teach other women how to code and sets a good example for future female developers,” Karaesmen said. “We hope that they eventually evolve from being a user to a developer and contribute to open-source programming with their own R package.”

Karaesmen’s workshops have not only allowed her to promote valuable technical skills but also to give back to causes she’s passionate about as well. She has donated over $4,000 this year to Pelotonia, a non-profit that supports cancer research, from proceeds raised by the workshops.

Her research at the College of Pharmacy centers on hematopoietic stem cell transplants in leukemia patients in Dr. Lara Sucheston-Campbell’s lab.

“The combination of Ezgi’s biological knowledge, programming skills and computational abilities have really allowed her to excel as a PhD student in terms of grants, papers and presentations,” said Sucheston-Campbell, PhD, an associate professor of pharmacy practice and science at COP. “Her desire and willingness to share this understanding with others makes her a wonderful addition to the lab and the broader scientific community here in Columbus.”

In addition to the 30 Under 30 Award, Karaesmen received the competitive Pelotonia fellowship and the College of Pharmacy Research Day Award in 2018.

After she earns her PhD, Karaesmen plans on continuing her research career as a postdoctoral researcher.