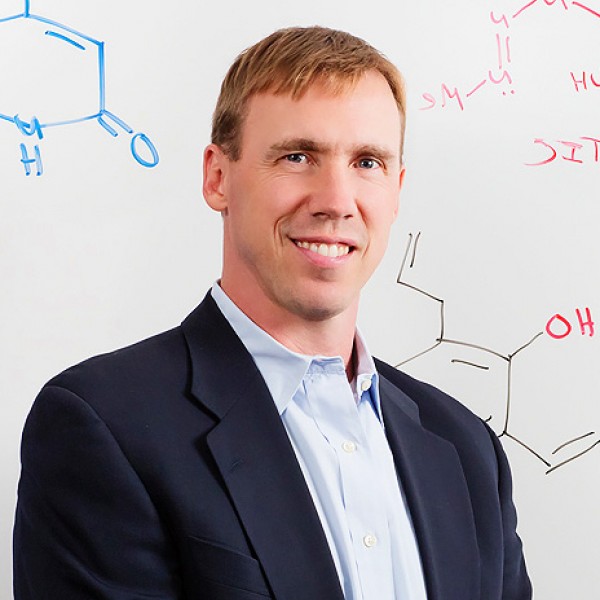 Hergenrother is a professor and Kenneth L. Rinehart Jr. Endowed Chair in Natural Products Chemistry at the University of Illinois at Urbana-Champaign. He is also the leader for the Institute for Genomic Biology’s “Anticancer Discovery from Pets to People” theme, director of the National Institutes of Health Chemistry-Biology Interface Training Grant and the co-founder and chief scientific officer of Vanquish Oncology.

Hergenrother’s research seeks to use small molecules to identify and validate novel targets for the treatment of diseases, including cancer, degenerative disorders and multi-drug resistant bacteria. Currently, an anticancer compound discovered by the Hergenrother lab is being taken by cancer patients at the University of Illinois Cancer Center and at Johns Hopkins as part of a Phase One clinical trial.

After attending the University of Notre Dame for his BS in chemistry, Hergenrother moved to the University of Texas at Austin to conduct graduate research under the direction of Professor Stephen F. Martin. He graduated with his PhD in Chemistry in 1999. He then transitioned to an American Cancer Society postdoctoral fellow at Harvard University where he worked in the laboratory of Professor Stuart L. Schreiber in the Department of Chemistry and Chemical Biology, before becoming a faculty member at the University of Illinois at Urbana-Champaign.

Hergenrother has been the recipient of numerous awards and accomplishments throughout his career. More recently, he was named by Technology Review magazine as one of the top innovators under the age of 35. He was the recipient of the 2016 Innovation Transfer Award from the University of Illinois, the 2016 UCB-Ehrlich Award for Excellence in Medicinal Chemistry, the 2016 Akron Section Award from the ACS, a 2017 ACS Arthur C. Cope Scholar Award and the 2018 ACS Sosnovsky Award for Cancer Research.

Abstract: Only one in 20 anticancer compounds that begin human clinical trials will become an approved drug. Many have pointed at the traditional development pathway -- whereby anticancer efficacy is assessed in rodent models, and the next efficacy assessment is in people -- as a major reason for this poor success rate. We have been working to evaluate candidate compounds in pets with cancer, as a way to help these veterinary cancer patients that often have no other options and as a method to guide the selection of the human drug candidate. The lecture will describe this process through two examples, a procaspase-3 activator that has been extensively evaluated in pet dogs with cancer and is now in clinical trials in human cancer patients, and an NQO1 substrate that has been evaluated in pet cats with cancer.