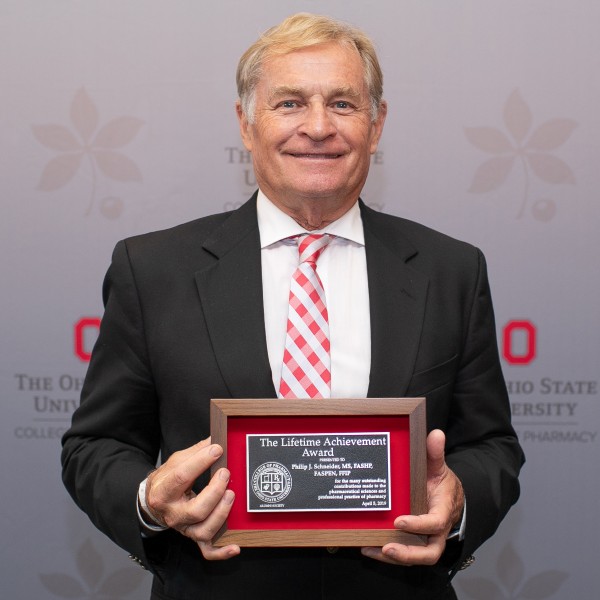 Alumnus Philip J. Schneider, MS, received the college’s prestigious Lifetime Achievement Award at the 2019 Pharmacy Gala. Schneider is one of only seven alumni of the college who have been recognized with this award.

The college’s Lifetime Achievement Award honors outstanding life-long accomplishments in pharmacy, pharmaceutical sciences or public service. Recipients of the award must have completed a degree or post-graduate training at the College of Pharmacy. The award is not given in any regular, repeating time period, but only when truly outstanding candidates are identified.

A 1975 graduate of the College of Pharmacy, Schneider has been a leader in pharmacy, having spent more than 40 years advancing the practice specifically in health-systems pharmacy and academia.

After graduating from Ohio State, Schneider later became faculty, holding a variety of positions at the university for 33 years, including clinical professor and director of the college’s MS in Health-System Pharmacy Administration specialization. During this time, he also held pharmacy practice and administration positions at The Ohio State University Wexner Medical Center, developing a nationally-recognized program for reporting and analysis of adverse drug events. The severity scale developed as part of this program is still widely used in the healthcare industry, serving as the basis for the system used by the United States Pharmacopeia.

Schneider then went on to assume the position of Associate Dean for Academic and Professional Affairs in the University of Arizona’s College of Pharmacy, Phoenix Biomedical Campus. Until his departure in 2017, he was responsible for the launch and growth of the college’s program at the new Phoenix Biomedical Campus. He held faculty appointments at the University of Arizona’s Colleges of Medicine and Public Health. Schneider is also the founder and principal of MediHealthInsight, which provides consultation to industry and others on matters related to improving the use of medicines, including the application of new technologies in healthcare. In 2019, Schneider rejoined the faculty at Ohio State as a professor of pharmacy practice.

Throughout his career, Schneider has held many leadership positions and received numerous awards for his service. He is the past president of the American Society of Health-System Pharmacists (ASHP) and the American Society for Parenteral and Enteral Nutrition (A.S.P.E.N.), and served as vice president of the International Pharmaceutical Federation. He served on several boards, including the ARxIUM Scientific Advisory Board, PipelineRx Executive Advisory Board and the AFPE Board of Grants. For his contributions to the profession, Schneider has received the Harvey A.K. Whitney Award, the Donald E. Francke Medal, the Stanley Serlick Award, the Jack L. Beal Postbaccalaureate Alumni Award and many others.

On receiving the award, he shared his gratitude for those who helped him along the way.

“I’m incredibly grateful to receive this award, but there are three other things I’m grateful for that I’d like to share,” Schneider said. “The graduate program, my career with Ohio State and my family. Without these three things I wouldn’t be where I am or who I am today.”