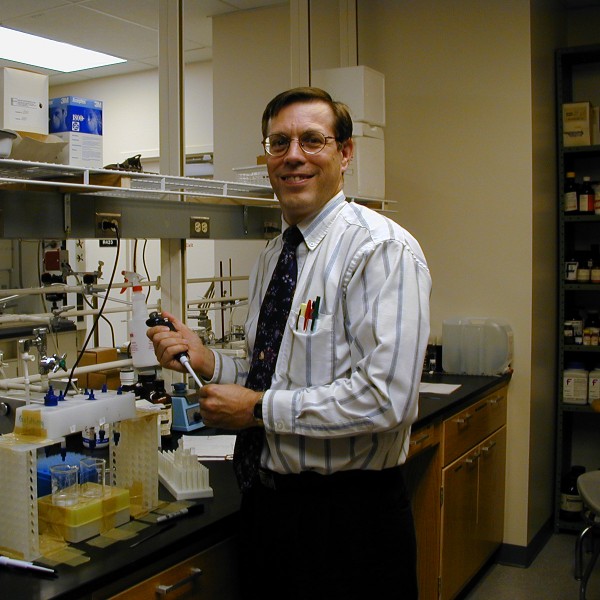 “Education is improving the lives of others and leaving your community better than you found it.”

This quote by Marian Wright Edelman, an American activist for children’s rights, perfectly sums up the effect Lane Wallace, PhD, faculty emeritus of Pharmacology in Ohio State’s College of Pharmacy has had on his students and the college.

Asking around the building, it’s nearly impossible to find a student, faculty or staff member who hasn’t heard of Dr. Wallace. His friendly demeanor and thoughtful responses to questions makes him a popular professor and go-to person for faculty and staff.

Over the past 40 years, Dr. Wallace has held many positions at Ohio State – professor, chair of Pharmacology and associate dean of graduate studies and research, mentor and friend. He left his mark on each.

Dr. Wallace came to Ohio State in August 1979, after completing an undergraduate degree in chemistry and a graduate degree in pharmacology at The University of Utah and two years of post-doctoral training at Washington University at St. Louis. He had always been interested in the brain, specifically the role of molecules and cells in the science of memory, and stumbled into pharmacology. During his graduate studies, Dr. Wallace began to focus on neurobiology and published his first article in the Journal of Neurochemistry.

“I had a slow start in my research career – I was more interested in looking for opportunities to collaborate when I was starting out,” Dr. Wallace said. “There wasn’t much research happening on addicting drugs, and for neurobiology, tools needed to aid in the study of addiction weren’t widely available until the 1990’s.”

Dr. Wallace was hired as an assistant professor of pharmacology and given a three-year term assignment, during which he was assigned to teach Rational and Irrational Use of Drugs – a class he taught until the 2018-2019 academic year. After a faculty member left during his term assignment, Dr. Wallace was given a permanent position in the college. In 1990, Dr. Wallace saw a need in the college and felt he was up for being part of the solution.

“Before I started as associate dean, the position had been open for three years. I went to Dean Cassady and told him I was interested in the position because I thought it was important to have someone in that role and I thought that I could do it. When I took the position, it was a 50% appointment. By the end of my tenure in the position, I was spending 75% (time) because we had grown the position so much,” Dr. Wallace said.

The associate dean position, which he held until 2002, wasn’t the only thing that changed during Dr. Wallace’s career.

“When I started at Ohio State, clinical pharmacy was just in its infancy. Courses were one faculty member for one course,” he said. “There was a clear distinction between divisions. Now, with new tools and resources available to scientists, we are doing more interconnected work that is not as divergent as it has been in the past.”

Dr. Wallace also has seen vast changes in the availability of sophisticated techniques and the amount of information at our fingertips.

“I used to spend hours in the library, going through books and journals. Students had to take handwritten notes in class and the professor was the only accessible disseminator of information,” Dr. Wallace said. “Now, the ability to share information and materials has opened new worlds. Everything I cover for the Addicting Drugs class I teach, for example, is searchable on the internet. Students could find everything needed to pass the class without my help. But now there is an importance placed on giving students the information they need in a way that facilitates learning.”

As one of the beloved professors in the college, this technique has worked. In 2003, 2007, 2013, and 2016, Dr. Wallace received the Award for Distinguished Teaching in BSPS. His name is also commonly referenced when alumni award winners give their speeches each year during the Pharmacy Alumni Awards.

“I have been uplifted and impressed through interactions with students who have participated in my classes and research activities,” Dr. Wallace said. “I am motivated to be better when I learn of the challenges some of them have overcome. I feel joy when I see them finally understand difficult concepts. I feel fulfilled when I can explain the latest research findings at a level they can understand. I have had a wonderful career.”

Video URL
« Back to Magazine Issue