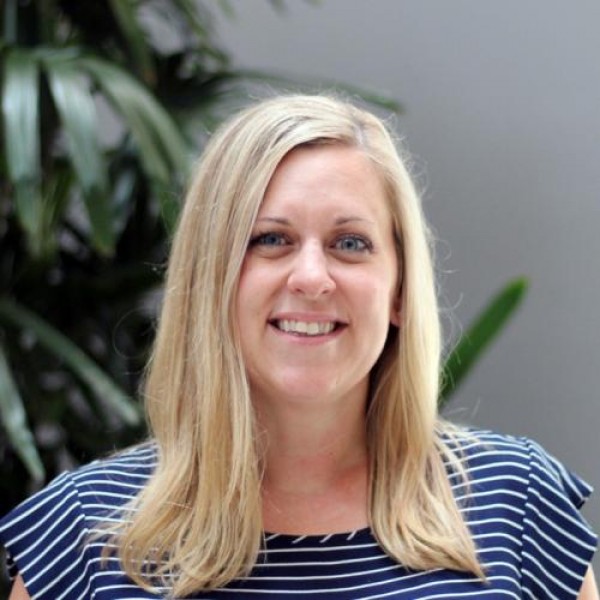 Prior to her current role at the College of Pharmacy, Watkins was an undergraduate advisor at the Ohio State College of Education and Human Ecology (EHE) and later found an opportunity in the Department of Teaching and Learning.

“She was instantly one of the most respected members in EHE’s centralized office and always responded quickly with clear and accurate information,” Jessica Mercerhill, PhD, director of academic programs and student services at the College of Pharmacy, wrote in her nomination letter.

Watkins realized her true passion was working with undergraduate students while at EHE, so she took a job as an undergraduate advisor for the Bachelor of Science in Pharmaceutical Sciences (BSPS) program at the College of Pharmacy in 2015. In a span of six years, Watkins ascended into two promotions.

“The wisdom and understanding Katie shows in her work is astounding to both of us – even more impressive when you consider her relatively short tenure at Ohio State and lack of medical background,” Assistant Professor of Pharmaceutics and Pharmacology Chris Coss, PhD, and Assistant Professor of Pharmacy Education and Innovation Zachary Woods, PharmD, wrote in their nomination letter. “Katie is neither a researcher nor a pharmacist, yet she navigates with confidence a college that is hyper focused on health care and science. She is successful in this because she puts in the work to learn about the needs of any situation.”

Watkins wears many hats as program director. She leads a team of BSPS academic advisors, oversees orientation for all first-year BSPS students, supervises the college’s survey course, manages the College of Pharmacy’s Early Assurance Program (EAP) and provides essential feedback to faculty in all student-related matters.

Undergraduate student recruitment was recently added to Watkins’s role. In just one year, she increased the incoming BSPS freshman class to the highest it’s ever been, increasing admission by 70% in 2020 from 2019. This effort helped earn her the college’s Outstanding Staff Award in 2020.

“It was clear that Katie’s enthusiasm was contagious,” said Heather Sailing, academic advisor at the College of Pharmacy. “I have heard several students mention that their interaction with Katie is what really sold them on coming to Ohio State and joining the BSPS program.”

But her focus isn’t only on bringing student into the college, it’s also building and sustaining relationships with them.

“Katie gets to know our students even before they are officially our students and develops such a genuine connection with so many of them,” Saling added.

“Our students often cite conversations with her as turning points in their careers, prospective families echo praises for her kindness and attention and as faculty, we rely on her guidance and opinion,” Drs. Coss and Woods wrote. “While far too often in higher education it is easy to split into a transactional or defined relationship, Katie has taken it upon herself to serve everyone with all of her heart, as the cliché goes, for the greater good.”

In the face of the pandemic’s virtual shift, she developed solutions to engage potential students and their families through short video interviews with current students. She also ramped up phone campaigns and other methods to boost admission for the 2021 incoming class.

“In everything she does, Katie enhances the quality of work life for faculty and staff,” Dr. Mercerhill wrote. “[She] is the employee that everyone wishes they had. She is enthusiastic, collaborative and honest. When things don’t go as planned, she acts with integrity and holds herself accountable in order to make it right or improve for next time. Our work runs more smoothly because of Katie.”