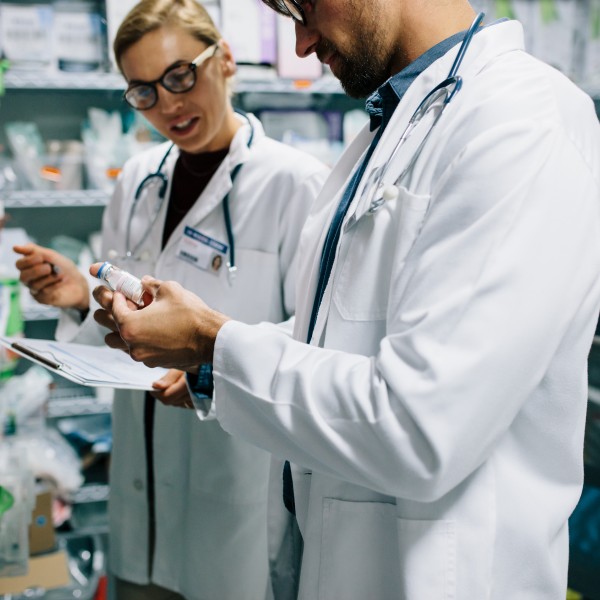 The iPhone wasn’t the only thing that turned ten in 2017. Generation Rx celebrated its ten-year anniversary of promoting safe medication practices and prevention of prescription medication misuse.

In 2007, the misuse of prescription medications, especially opioids, was rising to near-epidemic proportions. More people around Ohio were dying of drug overdoses than car accidents every day and something needed to be done. That’s when the College of Pharmacy’s Ken Hale, RPh, PhD, and Nicole Kwiek, PhD, decided to take matters into their own hands.

After reading the book Generation Rx: How Prescription Drugs are Altering American Lives, Minds, and Bodies by Greg Critser, Hale knew he could do something to make a difference, and could do it right at Ohio State. The solution? Establishing a new prescription drug misuse prevention program – the Generation Rx Initiative.

The program’s mission is to educate people about the dangers of medication misuse, from children to seniors. Starting with one community toolkit, the program has now grown to seven distinct, free, online resources aimed at specific populations. In addition to these tools, programming has been created in collaboration with schools and the Generation Rx Lab located in COSI, where visitors can perform experiments to learn about the science behind medicines. The programming uses digital media and special events to get its core messages across, including:

Over the past decade, pharmacists and student pharmacists have embraced Generation Rx across the country through the American Pharmacists Association (APhA), APhA student chapters, state pharmacy associations, and individual practices. More than 37 million people have been reached because of Generation Rx events and educational resources. By educating patients about potential consequences, pharmacists of all ages help dispel critical misperceptions about safety and legality when misusing prescription drugs.

Recently, Generation Rx launched a new online program, Collaborate, to be used as a platform to connect pharmacists, K-12 educators and Ohio State Extension educators. While the focus of this tool is currently aimed at combating the opioid epidemic, it can be used as framework for future medication safety topics.

“Medications are integral to improving our health but only when used properly,” said program co-director Dr. Nicole Kwiek. “By establishing this collaborative educational model, we can address any medication-related issue and continue to promote safe medication-taking practices to people in Ohio and across the United States.”

While the College of Pharmacy and the Cardinal Health Foundation are drivers of this successful program, it could not have the impact it does without the help of its key partners. During an awards ceremony in October, 12 partners including Cardinal Health were recognized for their commitment to the initiative. However, there were many more organizations that played a critical role in Generation Rx’s success. For example, using APhA’s student chapters, Generation Rx Collaborative spread to nearly all major colleges of pharmacy throughout the country.

“We went to college administration in 2006 with a crazy idea and they believed in us and said yes. The dean at the time, Dr. Bob Brueggemeier, was incredibly supportive of the idea. That support continued with our current dean, Dr. Henry Mann,” said Hale. “Without our strong relationships with the college, students and organizations this program would never be possible.”

What’s next for Generation Rx?

Generation Rx is looking toward the future with no plans to slow the momentum.

“Quickly after starting Generation Rx, we outgrew the program at a local level,” said Kwiek. “We’ve always been focused on the scope of the initiative and being able to expand. Through our new initiatives with Collaborate, we are establishing partnerships around the state that we can leverage when we need to address future problems. We are laying the groundwork now.”

Kwiek explained that since 2007, Generation Rx has been playing catch- up to the opioid crisis. There had never been a way to mobilize large populations to educate around a common issue. By putting the pieces in place now, when the country starts to see evidence of a different crisis, people can quickly mobilize through every state’s extension offices.

In addition, the team wants to grow its personnel to match its expanded offerings and create a formalized structure to the team.

“We’ve been able to create all of these resources and have seen great success with this program nationwide with less than a fulltime position, and incredible support from students. We want to have the resources to develop even more and support our student chapters nationwide,” Kwiek said.

Lastly, the Generation Rx team wants to understand if their resources are moving the needle of change.

“We have great statistics on the number of people we are reaching across the country through our Generation Rx Collaborative student organizations, but we really want to see if we are making an impact,” said Hale, “We want to know if our resources are changing behavior.”

For more information on the program, or to download any of the free resources, visit GenerationRx.org.