A dual degree and a future full of possibilities 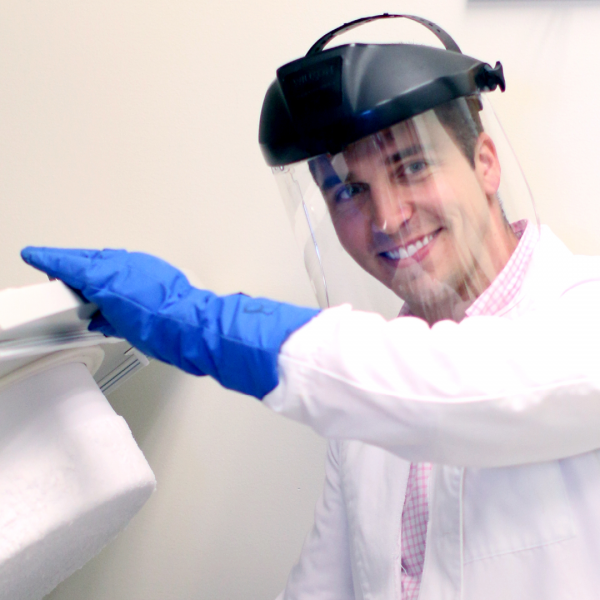 Some students map out their higher education experience and stick to a track that leads them straight to a predetermined career. Jason Anderson’s path was a little different – a mix of soul-searching and serendipity that would lead him toward an unconventional degree and the freedom to pursue an unconventional career.

Dr. Anderson graduated with a PhD from the College of Pharmacy in December 2019, three years after he earned a PharmD from the college. His decision to pursue both degrees simultaneously is one that not many students make, but one that he felt would provide the best opportunity to impact greater populations.

Dr. Anderson began his academic career as a first-generation undergraduate student at Youngstown State University (YSU), in his hometown of Youngstown, Ohio. He majored in chemistry and became involved in research labs. His interest in science made sense for someone who, as a kid playing scientist, would frustrate his mom by mixing her shampoos and conditioners.

He developed an interest in medicine and pharmacy during his time at YSU, and spent some time volunteering at a local hospital where he would see first-hand how pharmacists make a difference in patients’ lives.

“I found it fascinating that we can methodically design a medicine that a patient can take to alter a course of a disease and significantly impact their quality of life,”

Dr. Anderson said. “I wanted to be a pharmacist to make a difference and help patients.”

During his senior year, as he was applying to PharmD programs, Dr. Anderson participated in the National Science Foundation’s Research Experience for Undergraduates (REU) program, which took him to Spain for 10 weeks.

“I was able to experiment with moss that we got from Antarctica that has never really seen human interaction for its whole entire growth period,” he said. “We were looking at compounds and isolating compounds within that moss, and that really just piqued my interest, that maybe I should do this rest of my life.”

Dr. Anderson was accepted into Ohio State’s PharmD program in 2012, but the experience he had on the REU left him with the desire to incorporate more science into his pharmacy experience and learn more about how drugs work in the body. That’s when he called Cynthia Carnes, PharmD, PhD, senior associate dean of pharmacy practice and science at the College of Pharmacy.

Dr. Carnes pointed Dr. Anderson toward the college’s combined, seven-year PharmD/PhD program. It was less conventional and would require more time in school compared to a traditional PharmD, but it would give him more of a science foundation to pursue his budding interests.

As he looks back, Dr. Anderson recognizes the decisions he made that had a big impact on where he is now.

“With life you don’t really plan a lot of things, but you kind of wiggle,” he said. “Let me just talk on the phone with Dr. Carnes; let me just send an application for this experience in Spain. I probably won’t get it, but maybe I will. So it’s all serendipity, I guess.”

Dr. Anderson spent the first four years at the college completing his PharmD, which he received in 2016. He then transitioned to a full-time PhD student in the Division of Pharmaceutics and Pharmacology, conducting research on HIV drug development with Mamuka Kvaratskhelia, PhD, former Kimberly Professor at the college.

After a year in the lab, Dr. Kvaratskhelia accepted a position at the University of Colorado, and Dr. Anderson found himself once again charting a new path. Many of his peers from the PharmD program were already working in the field and had moved on to the next phase of their lives. He wondered if he should complete a master’s and go straight into drug development. But with encouragement from Dr. Carnes and others at the college, Dr. Anderson stuck with the PhD program and found a new lab to call home.

“One strength of the College of Pharmacy is there are a lot of different resources, and if you need something, the college is always there to support and help you,” he said.

“Drs. Baker and Sparreboom are both great mentors,” Dr. Anderson said. “They really accepted me as not just another student to help across the finish line, but they helped guide me to become a young researcher.”

Dr. Anderson’s time spent in labs taught him, among many things, that failure is OK.

“You’re basically trying to tackle problems that we don’t yet know the answers to, and that’s really what got me into research: you could have a problem, and you can’t open a book to see the answer – you have to put all the puzzle pieces together. Taking back that critical thinking skillset,” he said.

While earning his PhD, Dr. Anderson worked as an inpatient staff pharmacist at Nationwide Children’s Hospital, where he supervised interns and technicians, many of whom were either in or hoping to be accepted into the PharmD program at Ohio State.

Dr. Anderson found himself writing recommendation letters and providing prospective students with a glimpse into the program. Sometimes he would meet students who weren’t 100% clear on what they wanted to do, a position that Dr. Anderson had been in just years before, and one that he was qualified to advise on.

“When I chat with students interested in pharmacy school, I share my story. Maybe they can resonate with my experiences and carve their own path,” he said.

Now, with three degrees under his belt, Dr. Anderson is taking stock of the happenstance moments and decisions he made that have left him with a future full of possibilities.

“I went into pharmacy to help people; I like that one-on-one interaction,” he said. “But I had the desire to be involved in the research conducted at Ohio State – research that may someday be utilized to help design new and better drugs that will be dispensed and counseled by other pharmacists and ultimately help patients and save lives. That’s the best, in my view.”