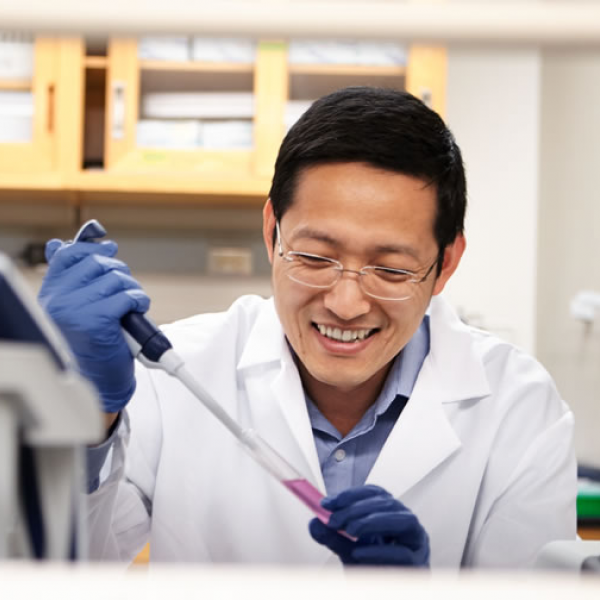 Yizhou Dong, PhD, associate professor of Pharmaceutics and Pharmaceutical Chemistry at The Ohio State University College of Pharmacy, was recently named a 2018 Nano Research Young Innovator in NanoBiotech. This R45 award is given to young researchers in various fields related to nanoscience and nanotechnology in recognition of their distinguished accomplishments and/or potential to make substantial contributions to their field.

Dong was one of 45 investigators (all of whom are under 45 years old) across the world to be honored with this award.

As a recipient of the Young Innovator in NanoBiotech Award, Dong’s work will be featured in a special issue of Nano Research. In his work, Dong and his team showed that amino-ester nanomaterials demonstrate great potential as delivery vehicles for theranostic applications. Dong’s team accomplished this by enabling a co-delivery of mRNA molecules and superparamagnetic iron oxide nanoparticles (SPIONs) by using an amino-ester lipid-like nanomaterial. An orthogonal experiment design was conducted to identify the optimal formulation. Lead formulation, MPA-Ab-8 LLNs, not only showed high encapsulation of both mRNA and SPIONs, but also increased the r2 relaxivity of SPIONs for over 1.5-fold in vitro. The team saw that MPA-Ab-8 LLNs effectively delivered mRNA and SPIONs into cells, and consequently induced high protein expression as well as dramatic MRI contrast. Consistently, the team observed both mRNA-mediated protein expression and an evident negative contrast enhancement of MRI signal in mice.

Since arriving at Ohio State in 2014, Dr. Dong has filed over a dozen invention disclosures and has ten provisional patents pending. Dr. Dong was recently recognized by Columbus Business First in the 201 7 class of “40 under 40”. Critically, Dr. Dong’s technologies have garnered commercial interest to translate his findings into improved patient outcomes.