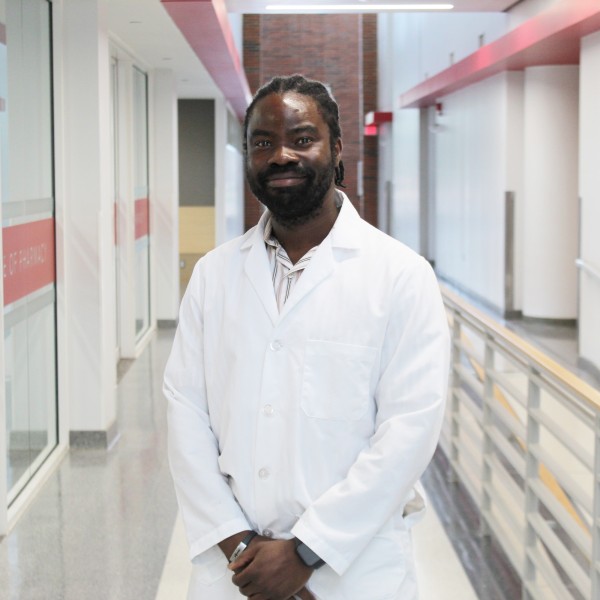 The CDP grant, worth $140,000 a year for two years, is awarded to young investigators at an early stage in their career to develop a collaborative research program working with HIVE investigators.

"Successfully obtaining research funding of this type is impressive," said James Fuchs, PhD, professor of medicinal chemistry and pharmacognosy at the College of Pharmacy. "This grant represents a significant milestone for Daniel as he works to build his independent research career. In addition to funding his proposed work, it also has the advantage of connecting him with leaders in the field of HIV research."

Dr. Adu-Ampratwum’s work will add to efforts of five HIVE investigators by developing small molecule probes to better understand the role of viral capsid (the protein shell that surrounds the viral material) in HIV-1 biology.

The small molecules proposed in his study are similar to well-known HIV-1 capsid-targeting antivirals such as,

Previous studies led by Dr. Adu-Ampratwum and HIVE members* focused on understanding the structural and mechanistic bases for exceptional potency of the compound LEN during the early steps of HIV-1 infection.

These studies culminated in a recent publication in the journal Science where the researchers proposed to continue collaborative molecular design, synthesis and testing programs to optimize these small molecules to understand HIV-1 biology.

“Vaccines are the ultimate cure for viral disease but that is yet to come for HIV/AIDS,” Dr. Adu-Ampratwum said. “Therefore, finding a long-acting therapy using small molecules is the alternative and this begins with understanding HIV biology using these small molecule probes.”

Through the grant, Dr. Adu-Ampratwum was also invited to speak about his work at the 2022 NIH HIV Structural Biology Virtual Meeting that was held at the end of June, which was a significant milestone in his career.