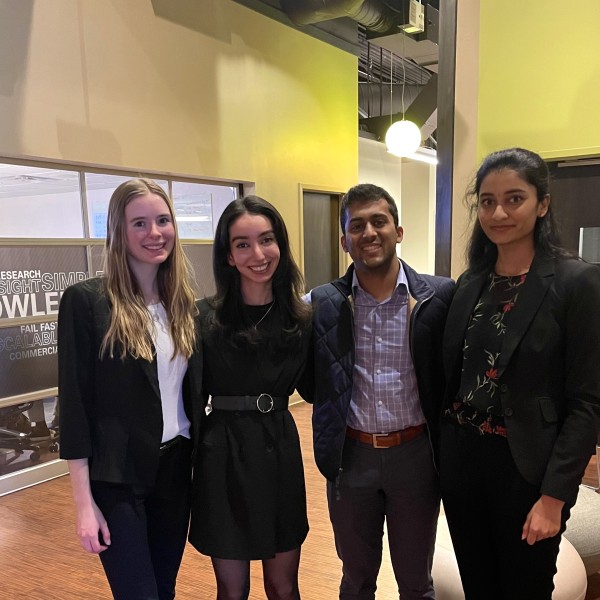 Two Bachelor of Science in Pharmaceutical Sciences students, Ava Barone and Amani Djouadi, along with their interprofessional student team, ranked top ten in a university-wide entrepreneurial competition for their start-up called SmileChild.

SmileChild’s goal is to fight infant mortality by supporting infants and their caretakers with educational resources through its app and social media (@SmileChildApp). In addition to their social media and app, the nonprofit works to carry out initiatives in hospital networks and community hotspots. SmileChild is currently collaborating with Nationwide Children’s Hospital and the Columbus community to host educational events to increase community knowledge and raise general awareness of infant mortality.

In January 2022, SmileChild was selected into the President’s Buckeye Accelerator Program, a program aimed to foster entrepreneurial skills in students who are building or plan on building start-ups. As a part of the program, SmileChild joined 35 other selected groups in a six week-long “Boost Camp” hosted by Ohio State president Kristina M. Johnson while also receiving mentoring from Ohio State faculty members. SmileChild was mentored by Scott Griffin, director of entrepreneurial programs and talent at the Ohio State Keenan Center for Entrepreneurship.

During Boost Camp, students listened to presentations from local entrepreneurs and professionals in digital marketing, cyber security and other relevant industries every week. These presentations were geared toward helping the students build their own business models, understand what investors were looking for and learn what a successful pitch looked like.

“One of the most valuable things that we learned was the importance of understanding our target audience and their needs,” Djouadi said. “We learned that you could have the best product in the world but if there is no market, the venture won’t be successful. We made it a goal to tailor the product (our app) to the needs of mothers and caretakers to successfully achieve our mission.”

At the end of the program, SmileChild, along with other groups, competed in a pitch competition where students presented their business model to Grace Wang, executive vice president of Ohio State’s Research, Innovation, and Knowledge (ERIK) enterprise, and other program faculty members. SmileChild was named a top-ten finalist.

SmileChild credits their success in the program to the interprofessional diversity in the group with seven colleges reflected.

“We have a pretty diverse group of people,” Barone said. “We’ve tried to get many different people involved on this from different colleges so we could have more perspectives and build a collaborative team.”

Group members and their majors:

“I think that what helped us succeed in the last pitch was our diverse and talented team,” said Djouadi. “It was clear that we had all of our bases covered in terms of research, development, and outreach. Diverse skill sets and ideas are essential to addressing this problem and changing people’s lives.”

Moving forward, the group says they will take what they have learned from the Boost Camp and apply it to SmileChild.