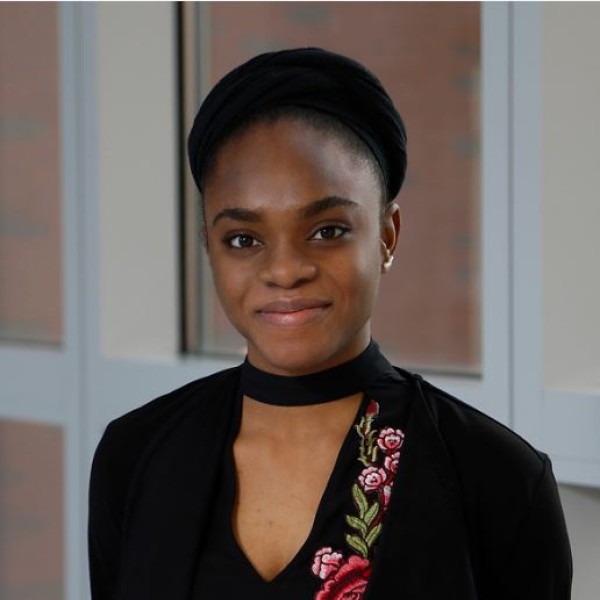 Oluwatosin “Tosin” Ayinde, a PhD student in The Ohio State University College of Pharmacy Division of Medicinal Chemistry and Pharmacognosy, was one of nine graduate students selected by the American Society of Hematology (ASH) to receive a 2022 Minority Hematology Graduate Award (MHGA). This award encourages graduate students from historically underrepresented minority groups in the United States and Canada to pursue a career in academic hematology.

For two years beginning July 1, 2022, MHGA participants will conduct hematology research in one of the following categories: basic, translational, outcomes-based or patient-oriented clinical research. They will each receive an annual $40,000 stipend over the two-year period to fund their research and to attend the ASH Annual Meeting and Exposition, where they will present their research findings at the Promoting Minorities in Hematology event. Each MHGA participant also receives ASH membership throughout graduate school.

“ASH has a long-standing commitment to supporting scientists and clinicians from backgrounds underrepresented in medicine and the ASH Minority Hematology Graduate Program is vital to this effort,” said 2022 ASH President Jane N. Winter, MD, of the Robert H. Lurie Comprehensive Cancer Center at Northwestern University’s Feinberg School of Medicine. “We congratulate the awardees and look forward to seeing more from them as they embark on successful careers in hematology.”

With the award, Ayinde will focus on early drug development through direct drug design and development campaigns that target cancers, particularly hematological malignancies (blood cancers) with the goal that these drug therapies will reach clinical studies.

Under her mentor James Fuchs, PhD, professor of medicinal chemistry and pharmacognosy at the College of Pharmacy, Ayinde is currently researching the design and syntheses of CDK9 degraders, drugs that invade cells and eliminate cancer-causing proteins, as potential drugs for acute myeloid leukemia.

“Tosin is an excellent graduate student. I would rank her in the top two of all graduate students who have come through my lab and one of the absolute best to come through our PhD program in my time since coming to Ohio State in 2017,” Dr. Fuchs said. “She decided before starting her graduate career that she would not only succeed but excel in graduate school – something that she felt she needed to do as a minority student in order to be competitive in the scientific job market. She has absolutely lived up to my expectations of her effort and at times, I need to remind her to take a break.”

While her research will require collaboration outside the walls of Parks Hall, Ayinde will collaborate with her secondary mentor, Natarajan Muthusamy, PhD, DVM, professor of medicine at the Ohio State College of Medicine and researcher at the Comprehensive Cancer Center – Arthur G. James Cancer Hospital and Richard J. Solove Research Institute. Under Dr. Muthusamy, Ayinde will learn how disease models are characterized and selected for evaluating potential therapies while also learning about the execution of experiments that occur inside a living organism or in petri dishes and test tubes.

“Tosin’s passion for medicinal chemistry is evident in the amount of hard work that she is always willing to invest. She is dedicated to making important discoveries in science and she has the work ethic and determination to use these discoveries to help people,” Dr. Muthusamy said. “I look forward to seeing where her skills, values and hard work take her as she moves forward in her career. From her academic, research and service record, I have confidence that she will deliver impressive results. It is my hope and expectation that she will transition into a unique breed of academic investigators focusing on the interphase of drug development and translational research for hematological diseases.”