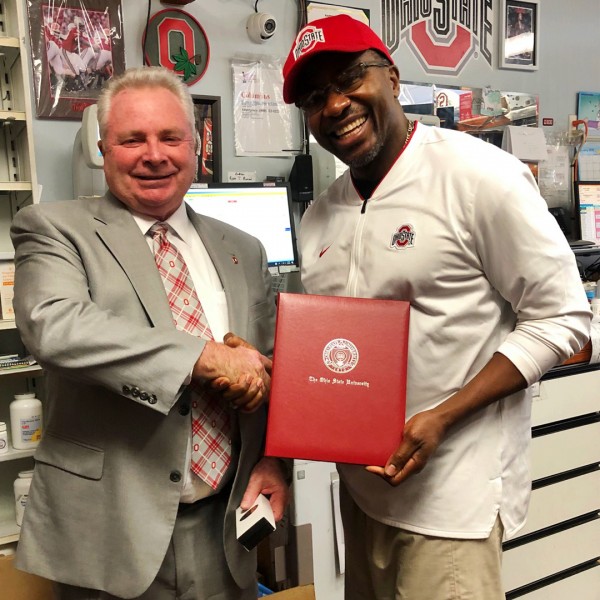 For Emmanuel “E-Dog” Ezirim, paying it forward for other students has always been a dream for him – being alive to see the pay-off is even better.

A 13 year-old from Nigeria, E-Dog traveled to Ohio to help his sister care for her children while she finished her doctorate studies. During a local politician’s high school visit, E-Dog and a classmate questioned why their school didn’t have soccer (or fùtbol, as E-Dog would say). Soon after, their school had a team, and E-Dog quickly became a standout player. Unbeknownst to him, E-Dog was asked to tryout to be an invited walk-on player for The Ohio State University’s varsity soccer team. He made the team, and proceeded to play varsity soccer for four years. During this time, E-Dog was amazed at the advantages that varsity athletes were treated to – especially sponsorship gear like shoes.

“At home (Nigeria), you were lucky to get shoes once or twice a year – at Christmas and Easter. The fact that we were given play shoes to wear, not even your ‘Sunday best shoes,’ but play shoes, was crazy to me,” E-Dog said.

It was these experiences, topped with consistently hearing about Woody Hayes and his immense impact on the university and his players due to his generous spirit, that instilled E-Dog’s need to pay it forward.

“It is impossible to give back enough to ever make up for everyone that helped me, but I wanted to pay it forward to other students and hope that they will do the same,” E-Dog said. 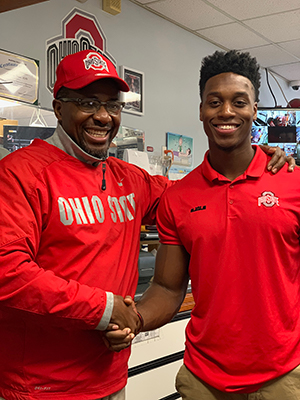 He did just that – The Emmanuel “E Doggy-Dog” (BS ’90, BS ’92) and ChiChi Ezirim Pharmacy Endowed Scholarship Fund was approved by the university and became effective on August 31, 2018. The annual distribution from this fund provides scholarship support to students who are enrolled in the College of Pharmacy and participating in a professional program. First preference is given to students who are former Ohio State varsity athletes, including cheerleading and/or members of The Ohio State University Marching Band. E-Dog’s second preference is that the scholarship be given to, but not limited to, under-represented students.

The first recipient of The Emmanuel “E Doggy-Dog” (BS ’90, BS ’92) and ChiChi Ezirim Pharmacy Endowed Scholarship Fund is Elijaah Goins, a former football player for The Ohio State University Buckeyes and a member of the PharmD Class of 2022.

Similar to E-Dog, Goins was a walk-on athlete. Through dedication and incredible hard work, Goins earned a scholarship before his final year of eligibility. While he was pursuing his passion on the football field, Goins was also hard at work on his studies and his future profession. Balancing the load of a student athlete, Goins was working toward his Bachelor of Science in Pharmaceutical Science and as a pharmacy technician at CVS.

Now, in pharmacy school, and again through hard work, some of the financial burden associated with pursuing an advanced degree will be lessened thanks to E-Dog.

“I am so humbled and appreciative of people like E-Dog. He is an inspiring person and I am extremely thankful for the scholarship,” Goins said.