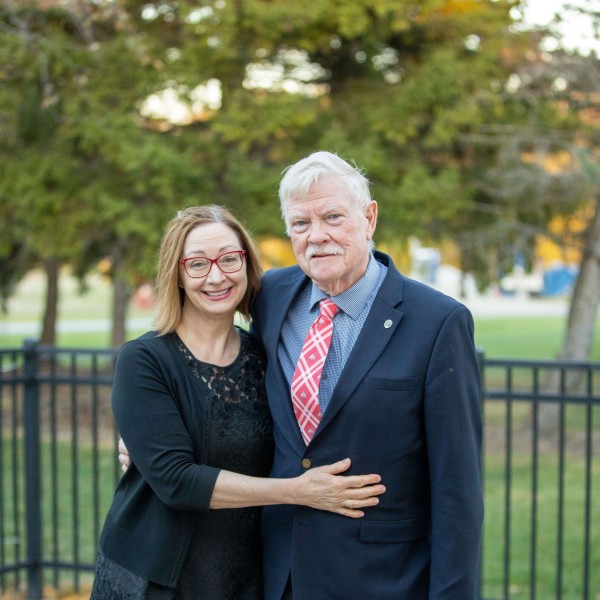 “You can never pay back, so you should always try to pay forward.”

These words from beloved Coach Woody Hayes inspired Larry Robertson, PhD, and his wife, Janet, BSPharm '84, to make a generous estate gift that will establish the Larry and Janet Robertson Endowed Fund for Drug Discovery at The Ohio State University College of Pharmacy.

This future gift will support early-career faculty members focused on early drug discovery, something Larry, professor emeritus of the College of Pharmacy, is passionate about. New faculty in the college's Division of Medicinal Chemistry and Pharmacognosy can use this fund as a research grant to buy lab equipment and other essential needs for their experiments.

Larry received his BSPharm degree from the University of Houston in 1966 and became a licensed pharmacist in the state of Texas. As an undergraduate student, Larry’s professors encouraged him to attend American Pharmacists Association meetings and allowed him to work on several research projects in their labs. He became interested in drug discovery, especially in the medicinal chemistry and pharmacognosy area. This led him to apply to the PhD program at Purdue University, where he was mentored by James E. Robbers, PhD, and Heinz G. Floss, PhD.

Larry officially started his career in drug discovery as an assistant professor at the University of Mississippi in Oxford, where he began work on cannabinoids, as well as antifungals and antibiotics from plants and fungi. In 1975, he was recruited to the Ohio State College of Pharmacy by Jack L. Beal, PhD, and Raymond W. Doskotch, PhD

Ever since I became a faculty member at Ohio State, I have been proud to be a Buckeye.

Janet graduated with her BSPharm degree from Ohio State in 1984. She worked as a nuclear pharmacist at Nuclear Pharmacy, Inc., which later merged with Syncor International Corporation and was eventually purchased by Cardinal Health in Dublin, Ohio.

Janet worked in the nuclear pharmacy at OhioHealth Riverside Methodist Hospital for 10 years. During the same period, she served as an adjunct faculty member at Columbus State Community College in nuclear medicine technology, where she helped establish the John Baumert Jr., MD, scholarship for students in the nuclear medicine program.

Both Larry and Janet have a long history of mentorship. Janet has mentored nuclear medicine students from Columbus State as well as students from Ohio pharmacy colleges.

During his career, Larry mentored more than 20 MS and PhD students. In addition, he mentored numerous BSPharm and PharmD students who worked in his lab on individual research projects.

“Mentoring these students was a major part of my life and is what I am most proud of,” Larry said. “They have all gone on to establish successful careers in teaching, research or other professional work. I have kept in touch with many of these former students and I’m happy that they are doing so well. I feel as if I left a legacy through them.”

Even though Larry and Janet are retired and no longer mentor students in a classroom or lab, they still find ways to further their legacy.

“We still have a way to support others and that is giving back to the institutions that helped us,” Janet said.

In addition to the bequest they have arranged in their estates, the Robertsons have supported other areas of interest across the campus, including:

Speaking of their newest gift, Larry added, “It is tough for a new PhD graduate to start a research and teaching program. I wouldn’t have been able to do everything that I have done without many kinds of help. I hope this fund helps launch the careers of junior faculty and leads to great discoveries of drugs from natural sources.”