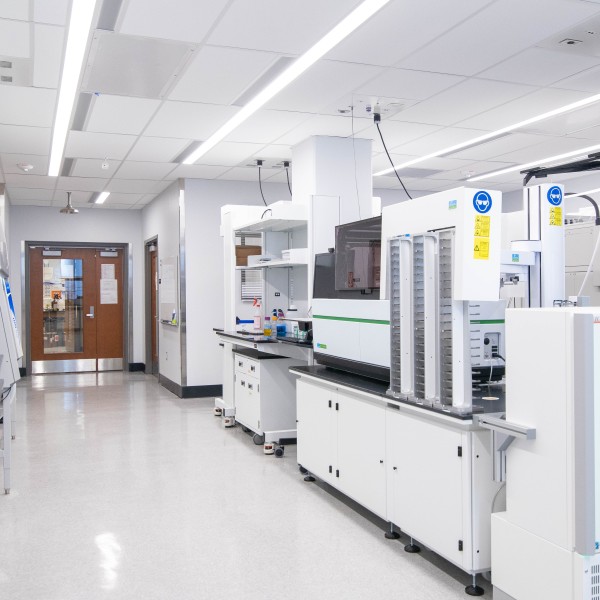 In 2019, COP and OSUCCC – James announced a partnership to build and fund a $3 million small molecule high-throughput facility that will allow for synergies in the discovery and development of new cancer therapeutics.

The newly completed facility resides in the Division of Medicinal Chemistry and Pharmacology space in Parks Hall and is accessible to faculty at the OSUCCC – James, COP and the greater Ohio State community. The partners will share intellectual property revenue from current and future cancer-related drugs, devices and other technologies developed by researchers occupying the space. COP and OSUCCC – James will share the costs to acquire patents and associated legal fees.

“The College of Pharmacy has had a longstanding partnership with OSUCCC – James since its inception,” Henry J. Mann, dean of COP, said at the time the shared facility partnership was announced. “This significant investment reinforces the groundbreaking work that we are doing to retain world-renowned researchers who are exploring new frontiers in drug discovery and development, pharmaceutical sciences and translational clinical research.”

How high-throughput screening works
Several approaches are commonly used to discover drugs. One important method is called “structure-based design,” where scientists take the molecular structure of a protein thought to be involved in a disease and try to design a molecule that will deactivate it by fitting in a pocket the protein naturally has.

High-throughput screening is different because scientists do not necessarily need to initially understand how certain molecules and proteins might fit together but instead can design a biological assay or method that allows them to test thousands of compounds to find the ones that have the most promise and develop them further. Precise software available to the researchers helps to analyze and filter the data.

“If you think about scientists running experiments in a lab, you might visualize them taking a single test tube and running an experiment in that tube," said Blake Peterson, PhD, professor and chair of the COP Division of Medicinal Chemistry and Pharmacognosy. "What makes high-throughput screening so special is that we can miniaturize these experiments and test multiple prototype molecules as drug candidates. It is a way to get a lot of data and get it quickly.”

An advantage to this type of screening is that scientists are not biased to a highly formulated hypothesis; they can allow discoveries to happen that would be difficult to predict in other ways. Scientists call this method “systematic serendipity” because prototype molecules can be discovered quickly by accident instead of through a long and arduous design-build-test process. In high-throughput screening, the most important aspect of the experimental design is upfront and focuses on the biological assay or method used to discover potential drug candidates.

“One of our key approaches is to do cell-based screening to determine if a small chemical molecule impacts a disease model on a plate compared to other slightly different chemicals,” Dr. Peterson said. “We can test different molecules on a model of disease on plates to identify molecules that have the most potential for treating that disease. One of our instruments is a very sophisticated microscopy-based imaging system that can detect how small molecules impact proteins in living cells. We have highly sensitive instruments that can study interactions between chemicals and proteins on very small scales, including in individual cells, that speed up this process. This is often a starting point in the drug discovery process. We identify prototypes for drugs that we can develop further down the road.”

It is a way to get a lot of data and get it quickly.

Current research in the core lab
The facility has already started experiments with Dr. Peterson and Ema Cocucci, MD, PhD, assistant professor of pharmaceutics and pharmacology at COP, identifying small molecules that will kill multiple myeloma cells, a type of cancer. Dr. Cocucci has identified proteins that associate to drive the growth of cancer cells, and he is working with Dr. Peterson and Dr. Meng Wu, the director of the high-throughput screening core, to identify inhibitors of interactions between these proteins that exhibit anticancer activity.

Dr. Peterson is also working with Shuiying Hu, PhD, assistant professor of outcomes and translational sciences at COP, on a research project titled, “A Chemical Biology Approach for Predicting OATP1B-Type Transporter-Mediated DDI Liability.” This study was funded by a Dean’s Innovative Research Award during COP’s 16th Annual Research Day in March 2022. Together they hope to identify chemicals that reduce drug-drug interactions associated with specific transporter proteins in the liver. Multiple other members of the OSUCCC – James are also in the process of initiating projects with the Medicinal Chemistry Shared Resource High-Throughput Screening Core facility.

Future of the facility
Drs. Peterson and Wu are continuing to build these capabilities at Ohio State by acquiring additional instrumentation and libraries of plated chemicals for screening. They are in the process of initiating multiple projects with members of the OSUCCC – James. They plan to work with the Drug Development Institute at Ohio State to expand the pipeline of drug candidates under development. This will help translate the most innovative research at Ohio State into tomorrow’s most promising treatments for patients with cancer.