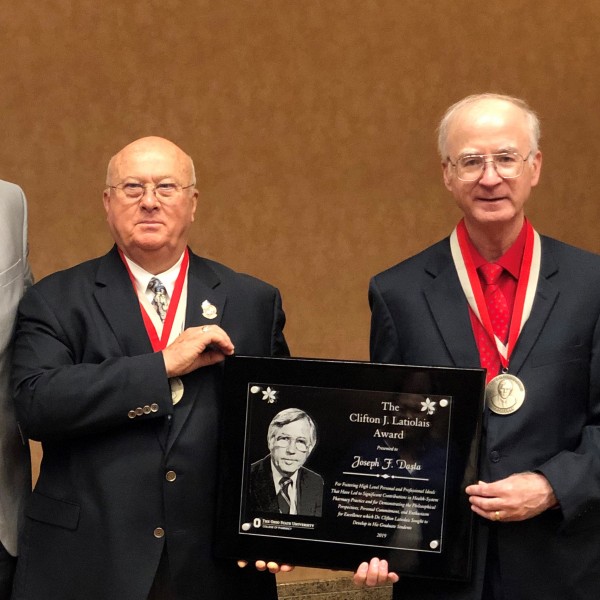 The Latiolais Award was created by students of the program to honor Clifton J. Latiolais, MS, DSc, a former professor at COP and the first director of pharmacy at University Hospital. Dr. Latiolais was a pioneer in hospital pharmacy, specifically the area of intravenous product compounding. He also founded the hospital pharmacy graduate and residency program.

The award is presented to a graduate of the health-system pharmacy administration and leadership specialization or an individual contributing to the Ohio State program while making significant contributions to institutional pharmacy practice. These contributions may include achievements or outstanding performance in institutional pharmacy practice, education, administration and/or research. Dasta was nominated by his peers and chosen for the honor by past award recipients.

Dasta received a Bachelor of Science in pharmacy from West Virginia University in 1974 and a Master of Science and residency in hospital pharmacy from Ohio State in 1976. He began his academic career at Ohio State and developed one of the first practice sites and postdoctoral residency and fellowship programs in critical care pharmacy. He trained 11 critical care pharmacy specialty residents and nine fellows; many are prominent practitioners, researchers and leaders in the profession and industry.

Dasta's academic appointments include professor emeritus at Ohio State's College of Pharmacy and adjunct professor at the University of Texas School of Pharmacy. He was a member of the Society of Critical Care Medicine council from 2007-2010 and serves on the editorial board of Critical Care Medicine and Annals of Pharmacotherapy. He is currently a healthcare consultant in the area of acute care pharmaceuticals.

“We often forget that Joe is considered the ‘Father of Critical Care Pharmacy Practice’ and has produced hundreds of trainees through his professional offspring,” said 2007 Latiolais Awardee and LLP director Robert J. Weber, PharmD, MS, in his nomination letter. “Joe single-handedly changed critical care pharmacy practice and established much of the cutting edge practice initiatives that are firmly in place today.”

Dasta has over 300 cumulative peer-reviewed publications, abstracts, brief communications and book chapters with an emphasis on medication safety, acute pain management, sepsis, acute hypertension, hyponatremia, acute kidney injury and pharmacoeconomics. He has given over 250 lectures on various topics related to critical care and health outcomes.