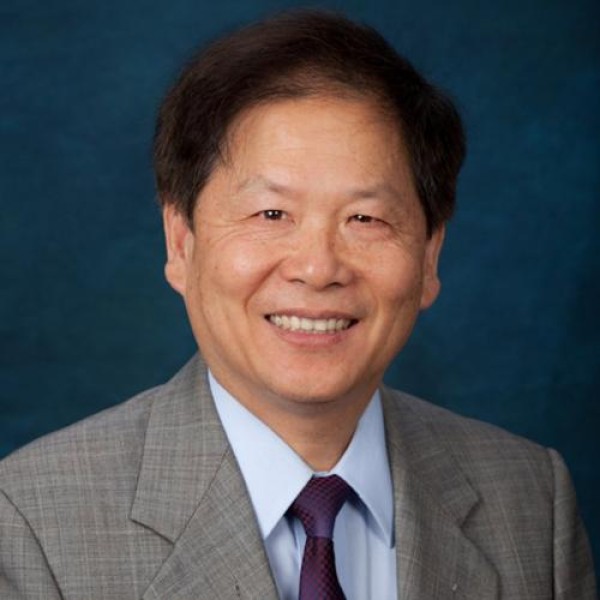 COLUMBUS, Ohio – Peixuan Guo, PhD, professor of pharmaceutics and pharmacology and the Sylvan G. Frank Endowed Chair in Pharmaceutics and Drug Delivery at The Ohio State University College of Pharmacy, is one of two faculty members at Ohio State to have been elected as a member of the National Academy of Inventors 2022 class of Fellows.

Jianrong Li, PhD, professor of virology in the College of Veterinary Medicine Department of Veterinary Biosciences, was elected alongside Dr. Guo. Both faculty members are among the 169 academic inventors to be named National Academy of Inventors (NAI) Fellows this year. They are the 15th and 16th Ohio State inventors to be chosen as NAI Fellows.

In 2021, Dr. Guo was named Ohio State’s Innovator of the Year, and Li, along with colleague Stefan Niewiesk, was among the finalists for the award.

The many RNA-related discoveries attributed to Dr. Guo, also director of the College of Pharmacy Center for RNA Nanotechnology and Nanomedicine, date back to his days as a student in the 1980s, when he determined that short segments of noncoding RNA not only existed but had important functions in cells. In findings published in Science, he called them “small RNA” or sRNA. Among those he proposed at the time was the microRNAs that have been found since to have a powerful influence over genes’ protein-building functions.

Dr. Guo’s discoveries involve some of the most intricate cellular processes – many of which have opened the door to the development of therapies, particularly for several types of cancers. He is a member of The Ohio State University Comprehensive Cancer Center Translational Therapeutics Program.

Dr. Guo was a pioneer in the field of RNA nanotechnology, first proving RNA strands could self-assemble into a nanoparticle, and since advancing understanding of RNA particles and properties that make them useful vehicles for targeted delivery of anticancer drugs. In 2014, he proposed that RNA therapeutics would be the third milestone in pharmaceutical drug development.

In 2020, his lab showed in animal studies that RNA nanoparticles have rubbery and amoeba properties that help explain why they target cancer tumors so efficiently and how they keep their toxicity low – by quickly leaving the body.

He reported in 2021 on a promising liver cancer therapy: an RNA nanoparticle designed to carry both a chemotherapy drug and a molecule to prevent the pumping of the drug out of liver cells. In animal studies, these nanoparticles targeted tumor cells effectively and inhibited tumor growth.

“RNA can be therapeutic, but it has taken some time for the field to get to pharmaceutical development,” he said. “The mRNA vaccines have opened up the public’s understanding of RNA. At one time, people didn’t believe it was possible – but now we know it is.”

Dr. Guo also points to his first construction of a viral DNA packaging motor. He discovered the third type of biomotors that use a revolving mechanism without rotation to transport the lengthy dsDNA genome. A biomotor is a biological machine that drives movement to help with the energy-related transport of proteins and other molecules – key processes behind such activities as walking and breathing, because transport is essential to the completion of numerous cellular functions. The use of the revolution mechanism without the use of rotation avoids the coiling or tangling during the transportation of the lengthy genome.

The finding eventually led to applications of this motor to perform “single pore sensing,” including the detection of individual peptides – short chains of amino acids – to advance cancer diagnostics.

Dr. Guo, too, took on new projects at the start of the pandemic, including development of an at-home diagnostic test for COVID-19 infection. An invention of his dating back more than 30 years made an indispensable contribution to the mRNA vaccines against SARS-CoV-2: a novel way of producing a molecule of vaccinia virus mRNA capping enzyme that prevents mRNA from degradation and ensures proper translation of mRNA protein-manufacturing instructions.

Dr. Guo has been a member of Ohio State’s faculty since 2015. He has filed 70 patent applications, with 13 granted and others pending. Most of these technologies have been licensed for commercialization.

“Of all the recognitions I have received, this is the highest honor in the field of innovation,” Dr. Guo said. “I am happy to be recognized as an NAI fellow.”

The NAI Fellows Program highlights academic inventors who have demonstrated a spirit of innovation in creating or facilitating outstanding inventions that have made a tangible impact on the quality of life, economic development and the welfare of society.

“This year’s class of NAI fellows represents a truly outstanding caliber of innovators,” said Paul R. Sanberg, PhD, president of the NAI. “The breadth and scope of their inventions is truly staggering. I am excited to see their creativity continue to define a new era of science and technology in the global innovation ecosystem.”

The 2022 class of Fellows will be inducted at the annual meeting of the National Academy of Inventors in June 2023 in Washington, D.C.