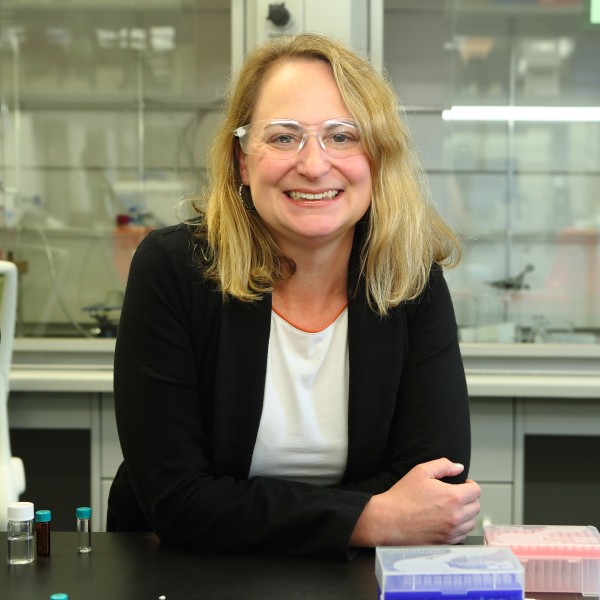 The Ohio State University College of Pharmacy will host its annual Research Day on April 1, from 8 a.m. to 1 p.m. in the Riffe Library (second floor) and Riffe 112/118. This year’s keynote speaker will be Joanna Burdette, PhD, professor and associate dean for research and graduate education at the University of Illinois at Chicago College of Pharmacy (UIC). Her talk, “Natural compounds as inspiration for new therapies in ovarian cancer,” will be at 11:45 a.m. in Riffe 112/118.

Burdette’s research focuses on biological questions that are important for women’s health. Her lab integrates imaging, drug discovery, organ on a chip and basic biology to try to understand how and where ovarian cancers originate. Their research primarily uses mouse models and organs on a chip to understand early events in ovarian cancers, and explores the potential of natural products for new anti-cancer molecules and their mechanism of action. Since 2007, she has worked to develop three-dimensional models of normal ovarian surface and fallopian tube cells to determine the earliest events in ovarian cancer.

After receiving a BS in Biology, Burdette received her PhD in Medicinal Chemistry and Pharmacognosy from UIC in 2003. She was a post-doctoral fellow at Northwestern University from 2003-2006, where her research centered on ovulation, breast and ovarian cancers. After completing a year as a research assistant professor at the Institute for Women’s Health Research at Northwestern University, Burdette joined the faculty at UIC.

She has been the recipient of numerous awards, including the UIC Researcher of the Year Rising Star in Life Sceinces Award, a Women in Endocrinology Abstract Award from the Endocrine Society, the UIC Vahlteich Scholar Award, the Liz Tilberis Early Career Award and a K12 Building Interdisciplinary Research Career’s in Women’s Health faculty training award.

Seminar Abstract: There is a large unmet need in effective treatments for high-grade serous ovarian cancer. PHY34 is a synthetic small molecule, inspired by a compound naturally occurring in tropical plants of the Phyllanthus genus. PHY34 was further developed to have potent in vitro and in vivo anti-cancer activity against high-grade serous ovarian cancer cells. PHY34 activity functions due to late-stage autophagy inhibition and apoptosis induction. In order to identify its molecular target/s, we undertook an unbiased approach utilizing photo affinity labeling, pulldown, and mass spectrometry. Protein targets from the nucleocytoplasmic transport pathway were identified, with the cellular apoptosis susceptibility (CAS) protein, also known as CSE1L, representing the top hit. No inhibitors currently exist targeting CAS/CSE1L, an essential protein in cancer cells. When compared to known inhibitors of other nucleocytoplasmic transport proteins, such as KPNB1 and XPO1, PHY34 activity was distinct, suggesting a mechanism apart from the activity of these previously developed compounds. Knockdown of CAS/CSE1L using shRNA mirrored that of PHY34 treatment, including the nuclear shift of alpha-importins, the cytoplasmic shift of nuclear localization sequence (NLS)-mCherry, and apoptosis. Knockdown of CAS/CSE1L also inhibited autophagy, uncovering a previously unknown action of CAS/CSE1Land connection between nucleocytoplasmic transport and autophagy. Analysis of patient datasets demonstrate increased CAS/CSE1L expression in high-grade serous ovarian cancer, correlating with severity of disease. Inhibition of CAS/CSE1L by PHY34 is a viable therapeutic strategy for the treatment of high-grade serous ovarian cancer.