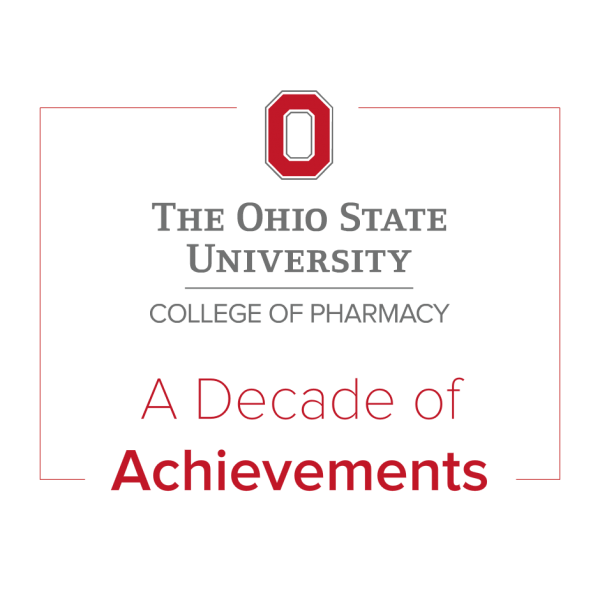 This decade has been full of progress for The Ohio State University College of Pharmacy. Both on and off campus, faculty, alumni and students established services and brick-and-mortar institutions to educate the public and improve our communities. Faculty members took on national leadership roles while the leadership of the college changed hands. And with the help of generous support from our donors, alumni and partners, the college transformed spaces to promote cutting-edge teaching and research that will better educate our students and benefit the health and well-being of our communities.

Check out the video showing a few of our many accomplishments over the last decade, and then read more below about each.

Under the guidance of College of Pharmacy alumnus Allan Zaenger, MS ’84, Charitable Pharmacy of Central Ohio, Inc. (CPCO) opened at the Livingston United Methodist Church in February 2010. The not-for-profit pharmacy provides pharmacy services to underserved patients who are without insurance and prescription coverage or who are unable to afford copayments. Zaenger served as CPCO’s executive director from 2009-2015. After his retirement, Jennifer Seifert was named executive director, a position she still holds today. Seifert is the college’s community resident PGY1 director. CPCO continues to serve Franklin County residents to this day and is an important partner to the college.

Marialice Bennett, BSPharm ’69, RPh, FAPhA, professor emeritus of the college, was elected president of the American Pharmacists Association (APhA). In her address as incoming president, Bennett shared her vision of pharmacy achieving its potential in a reformed U.S. healthcare system. She presided over the national organization for a one-year term and is widely recognized as a national leader in the expansion of pharmacists’ roles in medication therapy management.

Generation Rx opened a laboratory at COSI, the Center of Science and Industry, in downtown Columbus as an opportunity to educate thousands of visitors on drug safety and that dangers of prescription misuse. Pharmacy students also use the space for independent study projects. In addition, Ohio State’s College of Pharmacy and Ohio University’s Heritage College of Osteopathic Medicine teamed up to create a new ambulatory care rotation for pharmacy students while providing services to southeast Ohio. Thirteen Advanced Pharmacy Practice Education (APPE) Doctor of Pharmacy students participated in the program in its first year. The students experienced various ambulatory care settings which serve uninsured and underinsured patients. Included in these experiences is a mobile clinic staffed by a pharmacist, a nurse practitioner and a nurse.

Sitting at No. 21 on Nature’s list of the top 100 most cited science papers of all time was a paper co-authored by Thomas Schmittgen, PhD '92, associate professor at the College of Pharmacy. The 2001 article titled, “Analysis of Relative Gene Expression Data using Real-Time Quantitative PCR and the 2(T)(Delta Delta C) Method,” published in the journal Methods and had been cited 28,870 times, according to Thomson Reuters. Schmittgen was a double graduate from The Ohio State University College of Pharmacy, first with a B.S. in Pharmacy 1985, and then a Ph.D in Pharmaceutics in 1992.

The college partnered with the College of Social Work, the Office of Student Life and the Student Wellness Center to open a national collegiate substance misuse prevention and recovery center. The Higher Education Center for Alcohol and Drug Misuse Prevention and Recovery (HECAOD) was established to help college and community leaders develop, implement and evaluate programs and policies to reduce problems experienced by students who misuse alcohol and other drugs.

The college’s Doctor of Pharmacy (PharmD) program was rated six out of 134 programs in the nation, according to the U.S. News & World Report 2017 America’s Best Graduate Schools. The college, which has the only top 10 pharmacy program in Ohio, moved up from a rank of seventh in 2012.

The I3 curriculum takes an innovative approach to education by structuring classes in modules so students can experience the integration of science and practice.

The college was selected to receive the Lawrence C. Weaver Transformative Community Service Award by the American Association of Colleges of Pharmacy (AACP) for its commitment to addressing unmet community needs through education, practice and research. Areas of excellence noted for the college included serving vulnerable populations, curriculum-based engagement, public education and global pharmacy advancement.

Ohio State approved a combined BSPS/PharmD program, which began admittance in academic year 2018-19. This seven-year program provides a seamless, streamlined student learning experience for undergraduate students who are committed to pursuing a Doctor of Pharmacy degree from Ohio State.

The college opened state-of-the-art educational spaces for students and faculty by renovating our classrooms and counseling suites, including a 150-seat active learning classroom (the largest of its kind on Ohio State’s campus), and the Integrated Pharmacy Practice Laboratory. The college also initiated a 10-year partnership with The Ohio State University Comprehensive Cancer Center – Arthur G. James Cancer Hospital and Richard J. Solove Research Institute (OSUCCC - James) that will invest nearly $15 million into renovations to the college’s space.