Clifton J. Latiolais received his bachelor’s degree in pharmacy in 1952 from Loyola University in New Orleans.

Continuing his education, he went on to earn his master’s degree with a residency in hospital pharmacy from the University of Michigan College of Pharmacy.

Before joining The Ohio State University Hospitals, he held the chief pharmacist position at the University of Rochester Strong Memorial Hospital and served as assistant director of ASHP/APhA’s Audit of Pharmaceutical Services in Hospitals.

Latiolais began this career at The Ohio State University in 1958 and retired in 1983 after bringing international distinction to The Ohio State University Hospitals and the College of Pharmacy. During his tenure, he mentored 129 outstanding leaders in hospital pharmacy and pharmacy education who continue to have an enormous impact on the institutional practice of pharmacy. Many of these and subsequent graduates hold prominent positions in the profession.

Latiolais was at the pinnacle of hospital pharmacy for 30 years. In 1958, when Latiolais first became director of pharmacy at The Ohio State University hospitals, many hospitals were using floor stock distribution models. In his time at Ohio State, Latiolais redesigned the drug distribution system by developing a patient-specific five day supply system, which replaced the floor stock system. In 1965, Latiolais developed the first IV Admixture Program in a teaching hospital, another breakthrough in hospital pharmacy. Latiolais also revitalized the Pharmacy and Therapeutics Committee and implemented Nuclear Pharmacy and Drug Information Services, among many others.

In addition to radically redesigning hospital pharmacy, Latiolais established a graduate and residency program at Ohio State in 1959, which has produced directors of pharmacy at many of the top teaching hospitals in the nation. 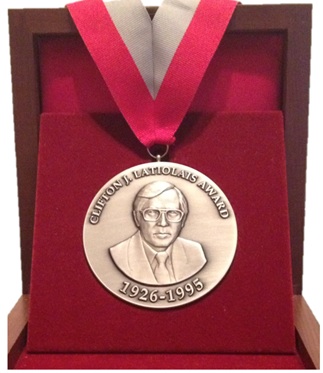 In 1985, about 25 years after Clif Latiolais began training graduate students and residents at The Ohio State University, his former students bestowed an honor upon him by creating the Latiolais Award to recognize excellence for contributions made to hospital pharmacy. The Latiolais Award is presented annually at the MS/Alumni Luncheon held each year at the Midyear Clinical Meeting for the American Society of Health-System Pharmacists, and has been presented to the nation’s finest leaders in health system pharmacy practice.

The Clifton J. Latiolais Award is given annually to an individual of high personal and professional ideals, who has made significant contributions to institutional pharmacy practice. These contributions may include achievements or outstanding performance in institutional pharmacy practice, education, administration and/or research. The individual must have demonstrated throughout his/her career the philosophical perspectives, personal commitment and enthusiasm for excellence which Dr. Latiolais sought to develop in his residents.

All graduates of programs participating in the Residency in Hospital Pharmacy/Master of Science program at The Ohio State University or individuals intimately involved with the development of these programs are eligible for this award.

Any member of the eligible pool of candidates may nominate potential awardees. Nominations should be submitted to the immediate past recipient who serves as chair of the Selection Committee. Consent will be obtained from all nominees.

The Latiolais Award winner is expected to attend the ASHP Midyear Clinical Meeting in the year the award is bestowed. The awardee will be expected to receive the award at The Ohio State University Residency Luncheon held at that meeting and present a 15-20 minute address to that group on a topic of his/her choice pertaining to pharmacy practice.